Coast Guard Rear Admiral June Ryan (retired) is the recipient of the Oswald Companies President’s Award from the Cleveland Leadership Center in recognition of her civic achievement and involvement with Leadership Cleveland.

Oswald CEO Robert J. Klonk (Leadership Cleveland 2016), who is a CLC Board member, presented the award.

The award was created in 2013 by Oswald Companies Chairman Marc S. Byrnes, who at the time was also Board Chair of CLC. “I believe in the ability of an organization and an individual to be a force for good in the community,” Byrnes said in establishing a fund at CLC to perpetuate the award. “The endowment and the award are structured to maximize impact,” he said.

CLC President and CEO Marianne Crosley said the recognition sets the course for ongoing service by the class presidents and their classmates, noting that Ryan, who will officially retire from the Coast Guard on September 30, is fully and deeply committed to Cleveland and to keeping her classmates engaged.

Ryan had been with the Coast Guard for 35 years and retired to remain in Cleveland rather than risk being posted elsewhere at the conclusion of her term overseeing U.S. waters of the Great Lakes and Saint Lawrence Seaway. “My family has been bitten by the Cleveland bug, and they don’t want to leave,” she told reporters in July.

Crosley said the award furthers CLC’s efforts to develop leadership capital that creates positive change for Cleveland and for future generations of civic leaders,” Crosley said. “It celebrates all of Cleveland’s leaders and inspires them to further impact.” 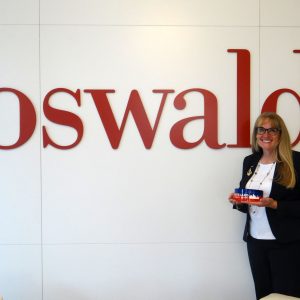