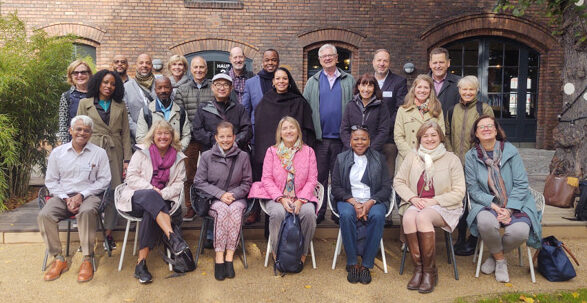 Cleveland Leadership Center brought a delegation of 23 Cleveland business and nonprofit leaders to Berlin, Germany, so they could gain new perspectives on civic challenges and solutions that will inform their work in Greater Cleveland.

The weeklong mission in late September 2022 followed a visit to Cleveland by a group from Leadership Berlin in 2019. That cultural exchange set the stage for a Covid-delayed visit to Germany coordinated by CLC and hosted by Leadership Berlin, which offers programming similar to Leadership Cleveland and other CLC offerings.

“The goal of this trip was to find the best of Berlin and bring ideas back to Cleveland,” said Marianne Crosley, President and CEO of the Cleveland Leadership Center. “I know participants came back with concepts they will look at implementing here.”

The group met with their counterparts at several business, educational, and cultural organizations in the largest city in the European Union. The itinerary included a meeting with a Member of Parliament, a performance by a choir of Ukrainian refugees who have re-settled there, exploration of sustainable energy initiatives, and visits to Jewish and Muslim communities.

Participants met in large and small groups with Berlin business and community leaders based on their professional and personal interests.

Ralph Dise, President of Dise & Company, was struck by the differences between education and training systems in Germany and the United States.

“Germany seems to have solved the high school-to-work problem facing non-college bound students. In its two-tiered system, a student may opt for an apprenticeship track around 10th grade. I’d bring that system home. It gives young people an opportunity to get serious work experience early on, before they have to make real-life career decisions,” Dise said.

Nigamanth Sridhar, Interim Provost at Cleveland State University and a CLC Board Member, had a similar reaction. “The strength of the education system, particularly as it pertains to experiential education, is incredible. There is a lot of care and thought provided to developing a future workforce that is constantly adapting to the needs of society.”

Dr. Margaret McKenzie, President and CEO of the Cleveland Clinic’s South Pointe Hospital and also a CLC Board Member, had visited Germany previously but this time she had the opportunity to meet with leaders at a large local hospital system.

”Like in the U.S., Berlin medical providers are feeling the aftereffects from the pandemic. We shared strategies on how to best provide care in an urban environment,” McKenzie said. “In particular, staffing challenges demand that we seek alternative models of providing nursing care, nurturing, developing and retaining talent. Addressing generational preferences for balancing work and life roles must be at the forefront of our strategies to mitigate these challenges.”

Tim Tramble, President of the Saint Luke’s Foundation, which focuses on eliminating health disparities in Cleveland, was surprised by the differences in the philanthropic cultures. “In the U.S., a combination of taxes and philanthropy support social services. But in Germany, social services are supported almost completely by the government.”

He was also impressed with Berlin’s infrastructure. “Berlin is a vibrant walkable city where you do not need a personal vehicle to access goods and services. All people in all areas benefit from exceptional infrastructure.”

Debbie Berry, Senior Vice President for Major Projects and Real Estate Development at the Greater Cleveland Partnership, is part of the team studying Cleveland’s Burke Lakefront Airport and was curious about the conversion of Berlin’s Tempelhofer Field into a public park.

“Berlin closed the World War II-era airport in 2008 and re-opened it as a public park in 2010. After the park opened, Berlin wanted to develop housing on some of the nearly 750 acres of greenspace and runways to accommodate growing residential needs,” she said.

A citizen-led referendum in 2014 ensured the entire area remains a park in perpetuity, Berry and other members of the Cleveland contingent learned as they toured the park and met with the leader of a community group that stopped the housing development.

Berry thinks the park could serve as a model if a decision is made to close Burke. On weekends today, over 70,000 people each day use the Berlin park’s former runways and taxiways to run, walk, bike, roller blade and even dance. In addition, the park offers a soccer field, basketball and volleyball courts, table tennis, lawn bowling, community gardens, grilling and picnic areas, a dog exercise area and a ”sea of meadows” serving as a natural habitat for plants and animals.

“Letting the space naturalize and adding amenities based on community input over time really allowed the park to evolve and become a regional draw. Something similar could be a huge asset for Cleveland’s North Coast if Burke closes,” said Berry.

Berlin claims the title as “start-up capital” of Europe. Deborah Hoover, CEO of Northeast Ohio’s Entrepreneurship Education Consortium, and Reka Barabas, the Consortium’s Chief Relationship Officer, were excited to tour EUREF-Campus Berlin, a nearly 14-acre CO2 neutral campus that uses renewable energy to make its own heat and power while supporting new and experienced entrepreneurs growing startups, especially ventures pursuing clean energy, sustainability, and mobility goals. The next day they and a small group visited with an engineering professor from Berlin School of Economics and Law who leads the Association for Dual Higher Education in Germany, founded in 2019.

“We learned how German universities created a consortium to support what we call co-op learning, where students alternate between paid work and school every few months to earn a degree. We were impressed by the high engagement of German businesses in this program. Most higher education opportunities in Germany are free,” Hoover said.

Mitchell Balk, President of the Mt. Sinai Health Foundation and the only Jewish member of the delegation, never in his lifetime expected to visit Berlin, ground zero for Hitler and the architects of the Holocaust.

“I was pleased to be able to provide some interpretation to what my Cleveland colleagues were learning through the lens of a member of the Cleveland Jewish community.” Balk said. “I know many Holocaust survivors and their children and visiting Berlin was very emotional for me. But our hosts from Leadership Berlin demonstrated again and again all that Germany has done and continues to do to educate its children about never forgetting the Holocaust, which includes a required visit by all students to one of the concentration camps.”

This is the third international excursion CLC has offered its alumni and supporters. For information about future missions, contact Marianne Crosley, mcrosley@cleveleads.org or 440-552-9385.

About the Cleveland Leadership Center (CLC)

The Cleveland Leadership Center’s mission is to build a continuum of civic leaders committed to our community’s excellence by serving as a catalyst for civic engagement. CLC inspires and connects people to transform Cleveland by developing leaders of all ages through learning and community engagement opportunities.