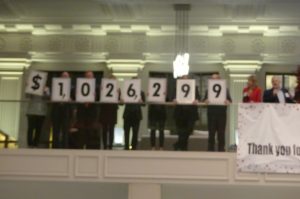 Cleveland Leadership Center has raised just over $1 million in the first phase of the organization’s Endowment Fund campaign.

“The endowment will enable us to apply resources to pressing community issues, convene leaders to address those issues, and explore innovative approaches to deepen the impact leaders can have on the community,” said CLC Board of Trustees Chair Ira Kaplan, Executive Chairman at Benesch, Friedlander, Coplan & Aronoff LLP.

More than 375 people have contributed $1,026,299 to the campaign so far. The achievement was announced at the annual Leadership Cleveland Holiday Party on December 3, 2019.

Alumni of Leadership Cleveland (LC), one of several CLC civic leadership development programs, are the fund’s major donors to date. The campaign was launched to Leadership Center alumni last year in conjunction with the program’s 40th anniversary celebration.

Endowment Committee Co-Chairs were grateful for the response to this inaugural endowment effort. “The Leadership Center has made a profound impact on hundreds of our community’s leaders and on their civic and professional work,” said Co-Chair Hugh McKay, Partner-in-Charge at Porter Wright Morris & Arthur LLP. “We set $1 million as an initial goal because CLC had never tried anything like this before. The overwhelming support reflects gratitude for CLC’s work, and cements the role of CLC as an important Cleveland institution now and for the future.”

While the initial goal has been reached, Co-Chair Ginger Mlakar, Senior Counsel and Director of Donor Relations at the Cleveland Foundation, noted that greater impact can be achieved if continued efforts to grow the fund are successful. “This type of permanent financial resource is so important to accelerate the Leadership Center’s innovative and entrepreneurial work. We know the fund will make a difference now and well into the future,” she said.

Seed money to launch the campaign was donated by Marc Byrnes (LC 2008), Chairman of Oswald Companies, when he stepped down as CLC Board Chair.

Visit www.cleveleads.org/Endowment to learn more about the Endowment Fund, see a list of Giving Circle donors, or make a contribution or pledge.