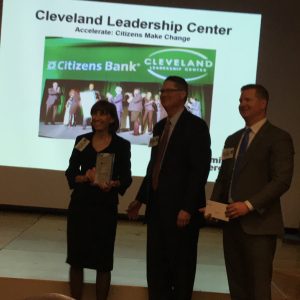 The Cleveland Leadership Center was one of 15 Ohio community organizations to be recognized with a Dominion Energy Community Impact Award, co-sponsored with Cleveland Magazine. CLC was recognized for its Accelerate: Citizens Make Change civic pitch competition

Dominion Energy presented $110,000 in grants to the organizations at the 24th annual awards celebration on March 26, 2019, at the Great Lakes Science Center.

Cleveland Leadership Center received $7,500 for Accelerate, which since 2015 has provided civic entrepreneurs a public and influential platform to develop ideas that make positive change in the community. The event is presented with the support of Citizens Bank and other corporate partners.

Two teens were named overall winners at the 5th annual Accelerate event on February 26, 2019. Israel Kambomba, a student from Congo who attends Thomas Jefferson International Newcomers Academy in the Cleveland Metropolitan School District, and Karson Baldwin, a student at University School, are building a project to address challenges of integration for newcomers and break down barriers between refugees and non-refugees.

A panel of community judges chose the Dominion award winners from among more than 50 entries, submitted by organizations throughout Dominion’s service area. The awards recognize nonprofit organizations that make Ohio communities better places to live, learn, work and play. The Dominion Energy Charitable Foundation, the company’s philanthropic arm, funds the Community Impact Award grants. The Dominion Energy Charitable Foundation is dedicated to the economic, physical and social health of the communities the company serves.

“As we have come to expect, this year’s Community Impact Award honorees devised, developed and delivered a wide range of ambitious, innovative and unique projects,” said Jim Eck, vice president and general manager, Ohio and West Virginia Distribution. “These projects demonstrate the major role our region’s non-profit and economic development agencies play in improving their local communities,” said Eck, who is enrolled in Cleveland Leadership Center’s Leadership Cleveland Class of 2019.

Since 1996, Dominion Energy and its predecessors have distributed more than $1.9 million in Community Impact Awards to Ohio organizations.

The other winners are:

Nearly 7.5 million customers in 18 states energize their homes and businesses with electricity or natural gas from Dominion Energy (NYSE: D), headquartered in Richmond, Va. The company is committed to sustainable, reliable, affordable, and safe energy and is one of the nation’s largest producers and transporters of energy with about $100 billion of assets providing electric generation, transmission and distribution, as well as natural gas storage, transmission, distribution, and import/export services. As one of the nation’s leading solar operators, the company intends to reduce its carbon intensity 60 percent by 2030. Through its Dominion Energy Charitable Foundation, as well as EnergyShare and other programs, Dominion Energy contributed more than $30 million in 2018 to community causes throughout its footprint and beyond. Please visit www.DominionEnergy.com to learn more.

About the Cleveland Leadership Center (CLC)

The Cleveland Leadership Center’s mission is to build a continuum of civic leaders committed to our community’s excellence by serving as a catalyst for civic engagement. CLC inspires and connects people to transform Cleveland by developing leaders of all age through learning and community engagement opportunities.