The CBB Class of 2015’s Adopt-A-Family Program expanded again in 2018. After adopting nine families with 33 children in 2017, this year’s program adopted 15 families with a combined total of 48 children. This year, we adopted six families in Cleveland/Cuyahoga County, six families from Medina County and for the first time ever, we partnered with The Battered Women’s Shelter of Summit & Medina Counties to adopt three families who were affected by domestic violence. All totaled, our group, led by Heidi Frisbie, Shannon Gallagher, Laura Lamb, Laureen Atkins, Hillary Lyon, Sara Thomas, Christine Klenotic, Liz Lazar, and I, we collected, sorted, wrapped, and delivered more than 500 Christmas presents to the children and their families. This year’s gifts included new toys, new clothes, new and gently used furniture, diapers, baby wipes, groceries, gift cards, and for one family, a home.

It seems every year, there is one family who presents a unique challenge and each year the Class of 2015 (and our connections) steps up.  In 2016, our first year, it was furnishing an apartment and a house for two families who had lost everything in separate fires.  Last year, it was installing a $3,000 furnace in the home of a family of six who had been living without heat since March 2017.  This year, one family lost their apartment after a domestic violence incident. After finding out the mother and her four kids had spent a weekend sleeping in their van in a Walmart parking lot, I put the notice out on our Facebook page while I arranged for them to stay in a hotel for two days. After multiple shares and within 48 hours, numerous classmates and community connections stepped up and offered help.  Friends, family and often times, complete strangers contacted me and the hotel they were living in to pay for 1, 2 or 3 nights of their stay. When mom and the kids finally left the hotel, people had donated more than $1,400 to pay for 20 nights in the hotel. More importantly, in something right out of a Hallmark Christmas Movie, the family moved into a five-bedroom rental house on Christmas Eve. I typically work with school guidance counselors to identify the families we adopt each year and this year, one group of counselors and teachers stepped up in a HUGE way. The family’s security deposit and first two months’ rent (almost $3,000 total) was generously covered by the teachers and guidance counselors in the school district the children attend. Having nothing but clothes and four folding chairs prior to moving in, our group also managed to collect and donate furnishings for the house including; four twin beds; a queen bed; four dressers; a kitchen table; a desk; a new sectional; new bedding for all the beds; and a washer/dryer combo unit. They were able to celebrate Christmas in their own home and, thanks to other donations, they had a Christmas tree and plenty of gifts when they moved in on Christmas Eve. 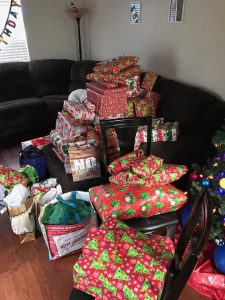 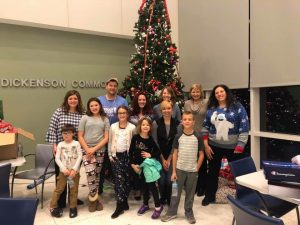